Animal Medical Center is a full service companion animal hospital founded in 1989 by Dr. Cynthia Hartz. We understand the special role your pet plays in your family and are dedicated to becoming your partner in animal healthcare.  Our goal is to practice the highest quality medicine and surgery with compassion, placing an emphasis on client education and providing high-quality veterinary care throughout the life of your pet.

Our services and facilities are designed to assist in routine preventative care for young, healthy pets; early detection and treatment of disease as your pet ages; and complete medical and surgical care as necessary during his or her lifetime.

Please take a few moments to browse our website and learn more about AMC and the pet health-care resources provided.

Thank you for visiting and we look forward to meeting with you and you pet! 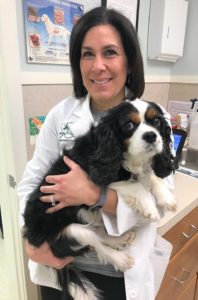 Dr. DiMaio graduated from the University of Pennsylvania School of Veterinary Medicine in 1998. After graduation, she joined the team at Animal Medical Center until her boys were born in 2004 and 2006. She continued her career in Norristown until January, 2019, when she returned to Animal Medical Center. Dr. DiMaio lives in Schwenksville with her husband Frank and her teenage boys Frankie and Luca. They share their lives with their rescued pocket pit bull Ruby.

Outside of work, Dr. DiMaio enjoys spending time with her family. Her free time is often spent watching her boys on a baseball field, soccer field or basketball court. She also enjoys reading, working out, cooking and paddle boarding.
Dr. DiMaio is a member of the American Veterinary Medical Association (AVMA), American Animal Hospital Association (AAHA), and the Delaware Valley Academy of Veterinary Medicine. 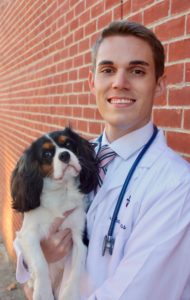 Dr. Jack Perkins graduated from the University of Pennsylvania School of Veterinary Medicine with a Veterinariae Medicinae Doctoris (VMD) with Penn Business Certificate in 2019. He received his Bachelor’s Degree in Veterinary and Biomedical Sciences with Highest Honors from Penn State University in 2016 and was accepted in Veterinary School one year early. Dr. Perkins worked as a Veterinary Assistant at Animal Medical Center while earning his Veterinary Degree. His primary areas of interest are soft tissue surgery, cardiology, and preventive care. Dr. Perkins was born and raised in Jeffersonville. In his free time, he enjoys spending time with his family and friends by playing basketball and tennis, skiing, playing card games and boards games, and exploring local towns alongside his Cavalier King Charles Spaniel, Penny. Dr. Perkins is a member of the American Veterinary Medical Association (AVMA), American Animal Hospital Association (AAHA), and Veterinary Business Management Association (VBMA). 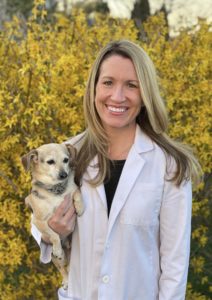 Dr. Megan Ruter graduated from the University of Illinois School of Veterinary Medicine.  She received her Bachelor’s degree in Animal Science from Penn State University, where she graduated Magna cum laude. Dr. Ruter worked for 7+ years at a small animal practice in Delaware County before coming to Animal Medical Center. Her primary areas of interest are dentistry, internal medicine, and geriatric care. She also has a very special love for golden retrievers. Outside of work, Dr. Ruter enjoys spending time with her husband and daughter, family, traveling, hiking, and house projects. She also lives with a chihuahua mix, Vinny, and a long haired cat named Fabio. Dr. Ruter is a member of AAHA, AVMA and PVMA. 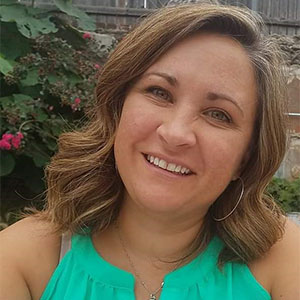 Melanie joined the AMC staff in September 2020.  She graduated from Bloomsburg University with a degree in Interpersonal Communications.  Prior to working at Animal Medical Center she was a Practice Manager for a well known national Veterinary practice.
Melanie grew up in the suburbs just outside of Philadelphia, where she currently lives with her husband Jake, her son Everett and deaf pittie, Bones.  She enjoys spending time with her family, going on  hikes and going out to eat!  She also enjoys sampling new kinds of wine and cooking new dinner recipes for her family. 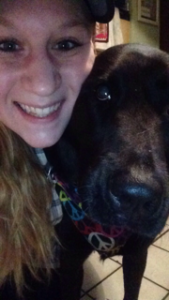 Emily joined Animal Medical Center in December 2018 as a Veterinary Nurse.  She graduated from Manor College with a degree in Veterinary Technology and received her certification (CVT).
Her animal family includes her black lab mix, Lola, goldfish named Steve, and 3 rescued mice.  In her spare time, Emily enjoys hiking with her dog, camping, fishing, and all outdoor activities. Emily also volunteers at a local soup kitchen. 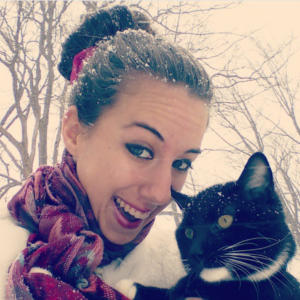 Molly joined Animal Medical Center in February, 2015 as a Client Care Specialist.  She received a BA Degree in English from Lock Haven University and is currently enrolled at San Juan College working towards her degree in Veterinary Technology.
Molly’s furry family includes her cats Boots and Bear. In her spare time she enjoys the beach, swimming, yoga, snowboarding, hiking and spending time with friends and family.  She is also currently working on getting her yoga teaching certification for fun!
Molly has been involved in the Montgomery County 4-H Club as a former President of the 4-H Goat Club and also as Program Coordinator (Intern). 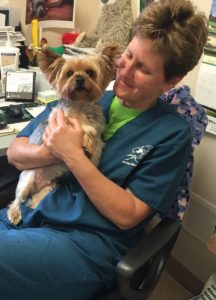 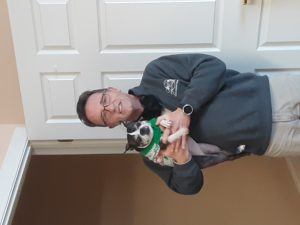 Veterinary Nurse Ken joined Animal Medical Center in August, 2012 as a Veterinary Assistant.  He attended Manor Junior College majoring in the Veterinary Technology program.  Prior to joining Animal Medical Center, Ken worked as a Pharmaceutical/Veterinary Technician for over 14 years at an animal hospital in Chester County. Ken lives with his wife, Trish and 2 sons.  His animal family includes 4 Boston Terriers, Rossie, Opal, Ruby and Izzy; a chihuahua, Ramsey; and a horse, Brisk.  In his spare time, Ken enjoys working on restoring his old farmhouse, working on classic cars, visiting the mountains and seashore, and spending time with his family and pets. 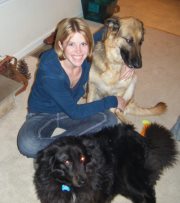 Veterinary Nurse Bethany joined Animal Medical Center in 2010. She lives with her husband and two sons. When not at work, Bethany enjoys time with her family, cooking, and chasing after her toddlers. 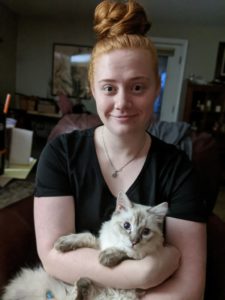 Marissa joined AMC in November 2020. She received an Associate Degree in Veterinary Technology from YTI Career Institute. She recently passed her VTNE for her Veterinary Technician Certification. She shares her home with her dog Annabell, who is a Pitbull/Whippet/Boxer mix, as well as 3 kitties, Chailai (Siamese) – Soul (Ragdoll) – Callie (Calico). Not to forget her Brazillian Rainbow Boa named Scarlett!! When she is not working, Marissa likes creating art (painting, drawing, sculpting and making jewelry), yoga and nature walks. 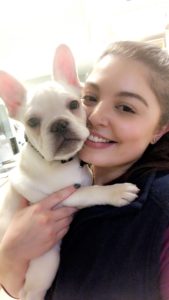 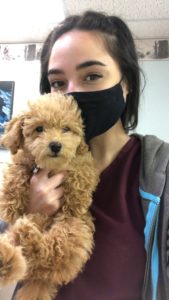 Veterinary Nurse Liz joined Animal Medical Center in June, 2020 as a Veterinary Nurse. Prior to joining AMC, Liz was a Receptionist/Technician at a large animal hospital. In her spare time, Liz enjoys hiking, biking, drawing and anything outdoors. 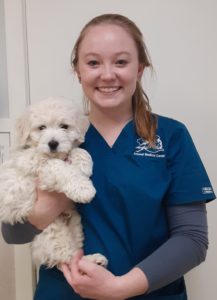 Veterinary Nurse Tyra joined the AMC staff as a Veterinary Nurse in 2021.  She had recently worked as a tech assistant, as well as an associate at a Pet Health Store and bakery.  She shares her home with her dog Louie and her boyfriend Noah.  Some of her hobbies and interests include hiking with Louie.

Veterinary Nurse Kate joined the AMC staff in the Spring of 2021, having 3 years of veterinary experience working at a Spay and Neuter clinic and a local veterinary hospital. She is currently a Full Time student at Ursinus, majoring in Biology.  Kate lives with her Mother and sister, along with their two dogs, Ben & Zoey, as well as a cat named Sam.    Ben is a rescue who enjoys life with just 3 legs!  When Kate is not working or going to school, she enjoys hiking, kayaking and spending time with friends and family. 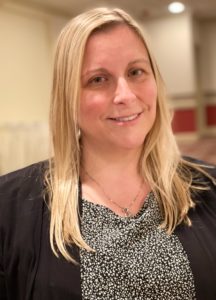 Veterinary Nurse Colleen joined our team in the Summer of 2021 and comes with 17 years experience in the Veterinary field.  She shares her home with her husband and their cat and dog!  In her spare time, Colleen enjoying gardening, cooking & baking, watching the Phillies and walking her dog.

Jackie joined our team in August 2021.  She is currently taking courses at Penn Foster to eventually earn her Veterinary Technician Certificate and has her Associates Degree in  Environmental Science.  Her previous experience is from two other veterinary hospitals as a Vet Nurse.  She shares her home with her husband and 3 sons, 3 dogs, 2 cats, rats, rabbits, a conure and fish!  When Jackie is not working she enjoys reading and gardening. 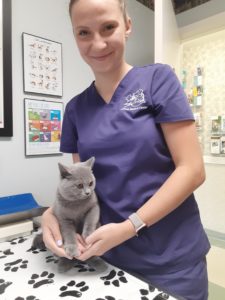 Tech Assistant Zosia started with the AMC as an intern in the Fall of 2020.  She fell in love with the pets and the staff and came on Part Time as a Tech Assistant in the Spring of 2021.  She is currently a Full Time college student at Urisinus College studying Biochemistry and Molecular Biology – on the pre-vet track.  She also works on campus as a tour guide and a Biology teaching Assistant.  When she isn’t here at AMC or on campus, Zosia lives with her parents and 2 younger siblings, their 2 hamsters, 2 axolotls and fish!  She loves hiking, outdoor activities and the beach. 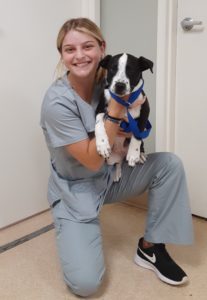 Tech Assistant Nicki began working at Animal Medical Center in the summer of 2021.  She is currently studying Small Animal Science at Delaware Valley University.  Her interests include hiking, reading and art.  She currently shares her home with her mom, dad, sisters and their dog.  Before joining the AMC team she was a Barn Hand as well as a Barista!  Fun Fact: her favorite animal is the Sea Otter.

Client Care Specialist Melinda joined Animal Medical Center in April, 2016 as a Client Care Specialist. She majored in Accounting and received a Bachelor of Science degree from Pace University. Melinda lives with her husband Jim and sons David, Alex and Michael, their 3 cats, Gus, Gordie and Luna, and Yertle the turtle. In her spare time, Melinda enjoys reading, cooking, camping at Assateaque Island, swimming and watching her sons drive their race cars. 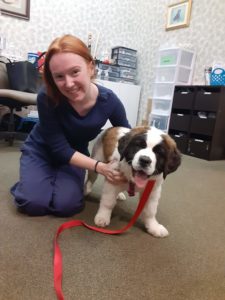 In her spare time, Maggie enjoys hiking and visiting Maine for vacation 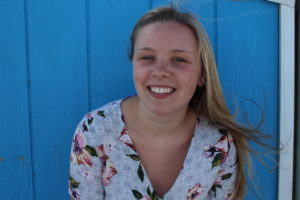 In her spare time she likes photography, going camping, kayaking, fishing and being outdoors. She has had a love and passion for animals since she was a little girl. Maddy also loves spending time with her family, two legged and four legged!